As investors, we have been looking at Africa as a potential destination for our capital for a while now. We believe Africa offers great potential for global investors. However, it is hard to find great investments there, other than mutual funds dedicated to emerging markets (either debt or equity).

Africa is the world’s fastest growing market, estimated to account for one third of the global population by the end of the 21st century. It is the second-largest and second most populous continent and has a growing middle class. Africans are moving to cities and adopting new ways of living, including much needed technologies available around the world. Consumer spending is rapidly increasing and set to rise from USD 860 billion in 2008 to USD 1.4 trillion in 2020.

Moreover, African governments have been opening up for business, and despite perceived corruption, institutions are becoming better and more transparent. Governments have improved stability, lowered inflation, adopted policies to reduce debt and trade barriers as well as cut corporate taxes. In Africa there is a unique commercial “need-to-have” vs. “nice-to-have” focus on investment sectors with the opportunities to improve the quality of life of hundreds of millions by using technology.

Africa also has an abundance and variety of natural resources including oil, precious metals, minerals and agriculture. According to the International Monetary Fund, Africa will have seven of the top ten fastest growing economies over the next few years.

All these macroeconomic details make us believe that there is enormous potential in Africa and therefore we have been looking for ways to invest in traditional securities (bonds, equities, funds) as well as in innovation since there is a growing trend of ‘leapfrogging’ innovation as seen by a stark rise in tech hubs, accelerators, incubators and corporate-startup collaboration with unique tech adoption rates.

As we have discussed with Zach George at Angel Investor School, in terms of countries and sectors:

“The approximate $2 billion invested into venture capital in 2019 two thirds of that went to three main regions: Nigeria, Kenya and South Africa. The other one third, was split between the two other East African hubs which are Rwanda and Uganda, and then Ghana in West Africa. And finally Francophone Africa, which is essentially Senegal, Cote d’Ivoire, Egypt, Morocco and Tunisia in North Africa. So these are the major economies from an investment perspective and from a tech startup invention perspective.

From a sector perspective, FinTech (including insurtech) gets a big allocation of the African VC market. So bank cards, mobile money mobile wallets, peer to peer insurance, asset management is a massive industry on the African continent.

After Fintech, logistics and mobility (including ecommerce) are the second largest sectors. The target market for these sectors is huge, with incredible distances to cover and massive populations.

The third place in terms of investments is healthcare. It is no surprise that so much can be done in Africa’s health system, including enterprise software, telemedicine, remote surgeries, delivery of pharmaceuticals and drugs, electronic health records, diagnostics. Health represents a huge market with a quick and growing young population.

The last sectors which have received investments are edtech (online education, vocational training, accessibility of online education tools) and agtech, mainly food and water security. Using technology like sensors, drones, artificial intelligence and machine learning to get better reliance and predictability of food supplies and shortening the gap between producers and suppliers.”

According to estimates from Briter Bridges, $2.4 billion in capital and acquisition value was deployed across Africa in 2020 with the following sector breakdowns:

One thing we have discussed in detail about Africa is the so-called “funding gap” and the potential valuation arbitration that exists between early stage companies and Series A or B. What this basically means is that, given the lack of very early stage funding for African startups, valuations at the very beginning and up to Series A may be significantly lower than in other jurisdictions. The founders, friends, and family round does not usually exist in Africa, whereas angel funding and micro VC is very limited. This vital part of any investment funding value chain is a key barrier to entry for getting a startup into a scalable business and building an entrepreneurial ecosystem. So the lack of capital from inside Africa, plus the lack of knowledge from outside investors (and the perceived risks), make the early stage funding very difficult.

However, as the companies grow and scale, and prove their products can be used massively with decent early returns, valuations tend to catch-up at international levels, creating this arbitrage. There are many more VCs willing to enter the market and compete at this stage in the life of the startups, and therefore founders manage to get higher valuations.

We believe there is a significant opportunity targeting this gap which fits quite well with being angel investors.

One of our (and most outsiders’) biggest concerns in Africa is the perceived geopolitical and instability risk. However, discussing with local experts we have come to the conclusion that this risk is much more relevant at the private equity stage and the corporate financing space than it is at the early stage tech. Early stage companies build tech in a simple and direct way, where most of the clients will be SMEs or corporates but not the government. When the startups start to grow, this is where the political risk may increase, so this would be a time to think about exiting, or factoring in the risk.

The jurisdiction where the companies are registered will also make the difference where additional protection for investors will be held.

When it comes to the holding companies, one of the things we notice is that most are incorporated either in the US, Singapore, Mauritius or Europe, to allow for easy investment from foreign investors. The operating companies will always be local companies, many spanning across different African countries, but the fact of having the shares in a stable and friendly jurisdiction makes all the difference for investors.

Moreover, most of the intellectual property will be registered internationally and protected outside of Africa, providing for additional safety. 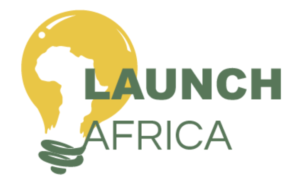 If you believe an investment in early stage ventures in Africa is the right fit for you, we invite you to check Launch Africa Ventures, a fund managed by Zach George and Janade Du Plessis which we believe is a great way to get exposure to a market with amazing potential.

Below we will highlight some of the key aspects we believe are worth considering and that have motivated our investment in the fund. If you are interested in a more detailed analysis, please check our quick guide and download the fund’s presentation.

Launch Africa Ventures (the Fund) is a frontier pan African fund, a first in Africa solving a significant funding gap and valuation arbitrage in the Seed to Series A bridge funding investment landscape in Africa. The Fund’s objective is to invest specifically in B2B and B2B2C technology-driven early-stage startups in Africa with strong, experienced management teams. The investment in early stage companies attempts to fund companies that would normally receive FFF funding in the rest of the world, but given the structure of Africa have been unable to receive funding (or takes too long and therefore companies do not manage to survive).

The Fund will seek to invest between $100k and $300k in 50 to 60 early stage companies that have gone through an accelerator or incubator programme such as Techstars, Startup Bootcamp, Y-Combinator, 500 Startups, etc. Startups must have signed proof of concepts or pilots from large corporations too.

The main sectors will go hand in hand with tech in Africa, mainly fintech, logistics and mobility, ecommerce, edTech and Healthtech. Finally, the Fund will invest across Africa, with no specific country focus.

We believe this provides great diversification in the region in terms of sectors, number of companies and geographical location. Diversification, as we have seen in numerous sessions at Angel Investor School, is one of the most important aspects of angel investing, as many companies will inevitably fail.

The Fund brings together a number of experienced VCs, Angel Investors, successful Startup founders and Acceleration/Incubation experts with a joint objective to provide capital, resources, expertise and networks to support startups in their bridge to their Series A funding round. The Fund management team has an unparalleled track record of investing in Africa. The core team has managed 5 African funds, and to date, collectively have invested in over 65 tech companies in Africa. The Fund has a Board and Advisory team that consists of some of the leading thought-leaders, investors and entrepreneurs in Africa, covering all North, West, East and Southern African regions. Operationally, the Fund will be supported by two highly experienced Venture Partners (in East and West Africa, respectively) and two investment analysts.

The two general partners are Zachariah George and Janade Du Plessis, both of whom have extensive careers in Venture Capital, angel investing, corporate ventures, and possess great African expertise and connections.

3. Termsheet at a glance

Please contact us for a potential waiver of the minimum investment size to USD 50k, as the Fund may consider angels from Angel Investor School as strategic investors, pending completion of appropriate documentation and fund due diligence.

The Fund is a self- managed Mauritius closed end fund, authorised as a Professional Collective Investment Scheme.

The Fund is set up in Mauritius. After discussing with the GPs, we understand it provides a great security, proximity to the region, high degree of confidentiality and beneficial tax regulations. However, it is always advisable to check your individual circumstances in order to check that the regulations are OK in legal, tax and other terms with your residence and nationality. 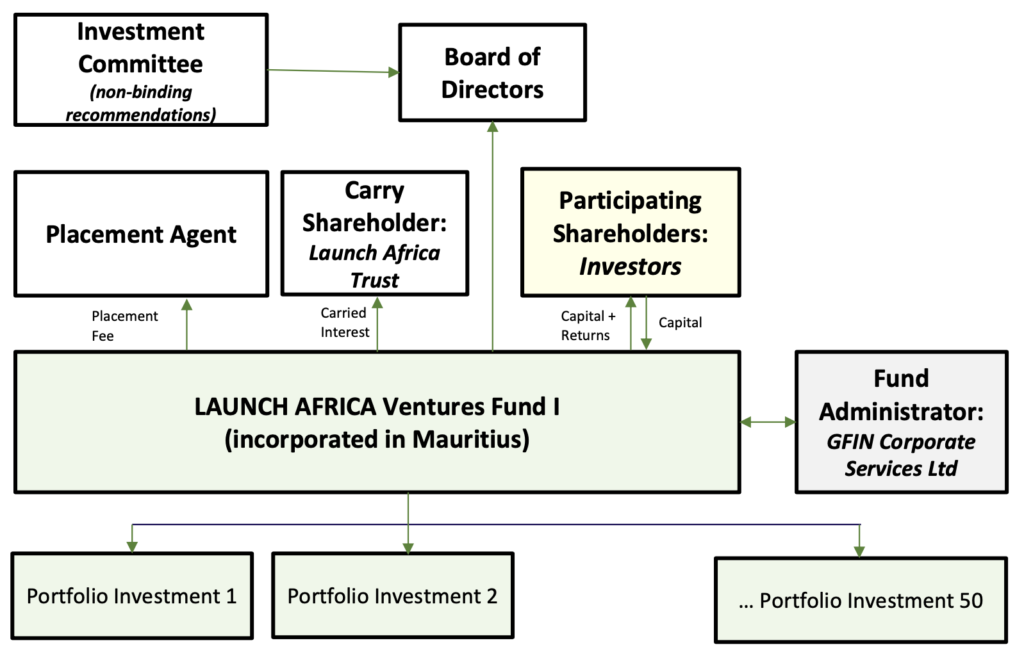 We list below some of the 20+ investments that have been already made in the fund, which show very promising performance. For the full list, we invite you to download the investor presentation at the end of this short note.

We are fans of Africa as an investment theme and see amazing potential in early stage startups in the region. However, as outsiders, when it comes to covering a vast number of countries, needs, problems and solutions and different investment possibilities. Choosing startups by ourselves in the region would be close to impossible and losing money would be an almost certain possibility.

We have therefore invested in Launch Africa Ventures and believe it is a great investment which gives access and exposure to amazing companies and follows an investment thesis that makes great sense to us. It provides diversification and we are reassured as it is led by one of our own ambassadors who provides us the trust we need when placing our capital. We know he is an expert in the region and in the world of early stage startups. 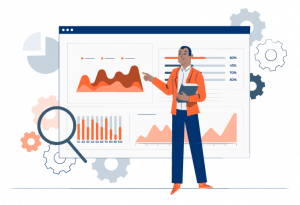 Thank you for your interest in Launch Africa Ventures early stage fund. Please complete your details below to receive the latest Investor Presentation

By downloading the Investor Presentation you agree to be contacted by Launch Africa Ventures for potential follow-up on your interest in case you have any questions. You can unsubscribe at any time.